In an ongoing effort to provide safe and reliable service, RTA is planning major track improvements this summer. Beginning Sunday, June 2, Red Line rail service will be replaced with 66R buses between West Park and the airport. This work will continue until Saturday, June 29. A new timetable will be created for this period.

We will return to the current schedule for the All-Star Game for two weeks (Sunday, June 30 – Saturday, July 13), and we will use the timetable that has an effective date of August 12, 2018. So please hold on to it!

Once the All-Star festivities are over, we’ll resume track work between Puritas and the airport, so a second timetable will be printed for service running Sunday, July 14 – Saturday, August 10.

To minimize confusion, each of the special shut- down timetables will be printed on colored paper.

On May 30th, 2019, it was determined that a retaining along the RTA right-of-way between West 117th Street and West Boulevard Stations was structurally deficient and could pose a danger of possible collapse if not repaired. The decision was made to cease Red Line operation in this area immediately following the determination. Due to this emergency Red Line shutdown, the Red Line service that is described in the above story is no longer valid. The currently operating service is 66R shuttles from the Airport to the West Blvd,- Cudell Station. This will end on June 29th.

From July 14th until August 10th, 66R Buses will replace trains from the Airport to West Boulevard.

From August 11th until later in the fall, 66R Buses will replace trains between West 117th and West Blvd. We will be able to more accurately predict when this construction will be completed after work has begun and the full extent of the damage to the retaining wall. 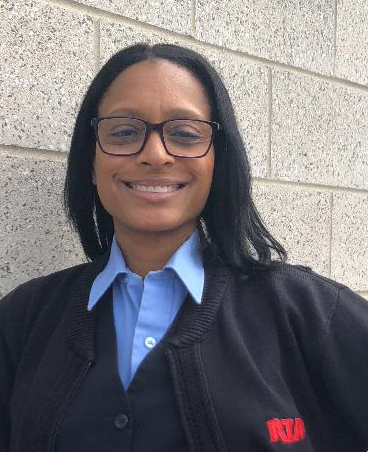 Leslie Rivers just celebrated her 19th anniversary of becoming a bus operator, and she’s made every one of those years count! That’s because Leslie takes pride in connecting with passengers, especially the younger ones. She goes out of her way to make them feel special—and sometimes even rewards them for good grades. Once, Leslie had a group from Cleveland Heights High School on her bus. She called their principal afterward to compliment the students’ behavior, so the school invited her to come and take a picture with them! If you know Leslie, you know that kindness and generosity are simply part of her daily life.

They’re also what drive her to enjoy meeting new people—especially new passengers. So hop on Leslie’s route, say hi, and see how she can brighten your day. All of us at RTA would like to thank Leslie for her hard work and positivity for the past 19 years!

We’re excited to bring back this popular program, which allows up to three children (aged 12 and under) to ride RTA for free when accompanied by a fare-paying adult aged 18 or older. This promotion runs Sunday, June 2, through Saturday, August 10.
Be sure to follow RTA on Facebook (Greater Cleveland Regional Transit Authority), Twitter(@GCRTA), and Instagram (@rideRTACleveland).

If you share pictures of your summer vacation with the hashtag #2019KRFonGCRTA, you can win some great prizes.

Whether you’re an east-sider or west-sider, there are plenty of opportunities to get out and enjoy a beautiful summer evening. And two of the best come in the form of weekly concert series: Wade Oval Wednesdays and Edgewater Live!
Located in University Circle, Wade Oval Wednesdays host a lineup of local bands to perform every Wednesday in summer (June 12 – August 21) from 6 – 9 p.m. And conveniently, it’s within walking distance to the Red Line’s Little Italy-University Circle stop.

Or head to the beach and stop by Edgewater Live on Thursdays (May 30 – August 1; no event on July 4). Performances begin at 4:30 p.m., with headliners taking to the stage from 6 – 9 p.m. Take the Cleveland State Line to Clifton-Lake or the #26 to W. 73-Detroit and walk through the tunnel.

Both Wade Oval Wednesdays and Edgewater Live are fun for the whole family and include on-site food trucks and activities, so get ready for a music-filled summer.

This summer, we’ll be working with the Cleveland Kids’ Book Bank to promote reading. And to increase access to education, we’ll host “Little Libraries,” where readers of all ages can pick out reading material. If you want to help out, please consider donating your new and gently used books. We’ll hold collections at various locations and events throughout the summer, so be on the lookout! We thank you in advance for your generosity.

We’re all proud of the work that has been done in Northeast Ohio to clean up our waterways, and we’re excited to celebrate its incredible progress. With that in mind, the RTA Board accepted a generous $75,000 grant from the City of Cleveland, Cuyahoga County, the Cleveland Foundation, and the George Gund Foundation to offer free rides on June 22 to coincide with events planned for the 50th anniversary of the 1969 Cuyahoga River Fire.

It’s always the perfect time to bring friends and family to Cleveland, but June 22 will be especially great because it falls during Visit Me in CLE Weekend, so there are some  awesome opportunities to show off our city! This weekend is devoted to showcasing all that Cleveland has to offer, whether you want to museum hop, enjoy a craft brew at Burning River Festival, take in an international soccer match at FirstEnergy Stadium, or grab a bite during Night Markets CLE in Asiatown.

RTA is a great way to hit all the hot spots without any of the hassle, especially when it’s free! Mark your calendar to ride on June 22.

RTA Transit Police want you to stay safe this summer, so they’re offering the following tips:

The RTA Transit Police played an invaluable role in us receiving this honor. They worked with a number of internal and external agencies to complete a full-scale active shooter drill, which had the clear focus of enabling RTA employees to make confident and competent decisions during an active shooter incident. RTA Transit Police followed up with even more extensive training, which was completed by 94% of all employees across all districts.

We’re grateful for their tireless efforts to keep the Greater Cleveland area safe.